Route 66: A Crash Course in Being American

Having lived in New York for seven months anyone who knows me or knows my husband Graeme, or read his The Rosie Effect which is set there, will not be surprised that I like the USA. Maybe not everything about the USA (eg gun laws) but then, hell, I don’t like everything about Australia either (sorry—Aussie rules footie). As our recent longish foot hopping, breath-holding moment at LA customs proved, we travel here a lot.

‘When were you last here Mam?’

‘April,’ I say with a confident smile. We had combined a conference (me, in Japan) and a book tour (Graeme, UK) with a stopover in New York and a few days in Yosemite. Okay, not exactly an obvious itinerary but we’re geographically challenged. It was memorable.

‘And before that?’ He isn’t smiling. Customs officers can be like that.

Hell. No idea. He’s looking at us as if we’re hiding something. Like Alzheimer’s.

I look stricken. I need a diary. The electronic one seems to delete itself.

‘Four days?’ Like who comes to USA for four days.

Thank goodness. No brainer. ‘We came to see Bill Gates.’

This might not have been a great answer. But like ‘Dropped in on Angelina Jolie.’ I try a long explanation—he exchanges a look with Graeme. Could be a ‘I see what you are up against’ look or ‘wow you’re famous’. Either way it works (and is true). A smile. We’re in.

Not as famous as we’d like to be. We could have been visiting Jennifer Lawrence. Two weeks ago she was going to be Rosie, but no longer; my Google alerts tell me it was all Sony’s fault for not signing her up fast enough. We’d be the last to know if this was true or not. Oh well, a bit like a roller coaster ride we are watching rather than being actually on. We meet Graeme’s film agent for Mexican. Very Californian: earnest smiles, unabated enthusiasm for life…and oblivious to the awful traffic. The traffic is maybe more orderly than Ghana where I was three weeks ago, and better roads, but still bumper to bumper. Why the hell don’t they put in trains???

Tonight, we’re dining vegetarian and starting to get the feel of my character in the joint book Graeme and I are writing – Left, Right – a love story set on the Camino De Santiago. His latest book The Best of Adam Sharp is in (edits still to go…), mine, Dangerous to Know, is also in (only line edits ahead), so I need to think American (heroine, Zoe comes from California, lives in Boulder) and Graeme, British (he has a head start – Adam is British too). Whilst the book is about a walk in Europe, we can’t walk in USA—PCT? Appalachian Way? Cheryl Strayed and Bill Bryson have already written about them. Admittedly nonfiction and we’re doing fiction. Okay, I’ll be honest. When we walk there are no tents involved and we wine and dine each night—so we’re doing what Americans do. Driving. Route 66 to Oklahoma City, then, given it’s winter, staying south as long as we can, straight across to pick up Memphis (yes, Heartbreak Hotel) and Nashville (me to channel my inner Natalie, though I think my heroine would not be into country music) before north to New York.

So here we are, back at Santa Monica for the second time this year, in true Australian style doing everything back to front (try reading road instructions like this—Graeme may have killed me before the end of this trip, which will help with the book, as our hero and heroine are going to start off as totally incompatible). We’re starting Route 66…at the end. 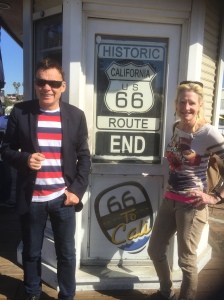 Anne Buist is the Chair of Women’s Mental Health at the University of Melbourne and has 30 clinical and research experience in perinatal psychiatry. She works with Protective Services and the legal system in cases of abuse, kidnapping, infanticide and murder. Medea’s Curse is her first mainstream psychological thriller. Professor Buist is married to novelist Graeme Simsion and has two children.
View all posts by annebuist →
This entry was posted in Uncategorized and tagged route 66, the rosie effect. Bookmark the permalink.

1 Response to Route 66: A Crash Course in Being American