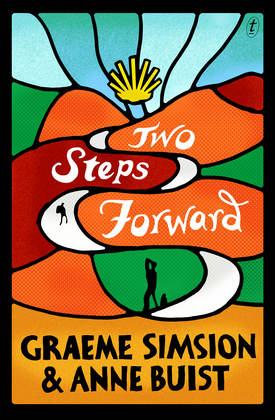 Two Steps Onward will be released June 2021. Come along to the launch on June 2nd 2021, hosted by Readings! Book here

DUE TO LOCKDOWN THIS DATE WILL BE CHANGED – stay tuned!!!

Apple Books is promoting it so pre-order at a discount here: https://protect-au.mimecast.com/s/Y1EBCK1qwBS2JGvjEfM_tEQ?domain=apple.co

A midlife rediscovery journey/romantic comedy, Two Steps Forward tells alternating points of view from Zoe, an American artist, and Martin, a British engineer. Both are grieving. Both are at  a turning point in their lives: no money, no partner, no children they are responsible for…and no idea what to do with their lives. Fate throws them together on the Camino, from Cluny to Santiago, and as they negotiate the terrain, culture and people along the Way, they find they have more to offer each other than they expected. But before they can find out whether their lives will be intertwined beyond the Camino, they need to work out what they are running from – and what it is they wish to keep, and what they need to leave behind.

“I enjoyed every moment of this information, funny and sweet novel” Readings

“The leisurely paced novel explores themes of forgiveness and self-discovery with gentle humour…a feel-good mature romance that explores what it is we need to leave behind in order to move forward.” Books + Publishing

In 2011, we walked out of the door of our French farmhouse with a 6kg pack (me) and a 10kg pack (my husband, Graeme Simsion). Eighty seven days (two days off) and 2038 km later we arrived in Santiago de Compostela having walked some of the less know routes of the Camino (from Cluny to Le Puy, then St Jean Pied de Port, then through the Pyrenees to join the Camino del Norte and finishing on the Camino Primatevo).

It was a magic experience, both spiritually and physically challenging, and it wouldn’t let go of us. We planned a novel and both wrote it from different points of view – and then last year put the two together, and edited it heavily. Originally called Left Right, Two Steps Forward is now due out 1st October 2017 with Text publishing.

We re-walked the entire Camino in 2016 for polishing touches. This time we finished off on the more popular Camino Frances (as seen in Martin Sheen’s The Way).

Two Steps Onward picks up three years after the end of Two Steps Forward when things hadn’t gone as planned, but Zoe and Martin have a second chance – to walk from Cluny to Rome, accompanying Zoe’s friend who wants to see the Pope…they travel the Chemin d’Assise and then join the Via Francigena in Italy.

Graeme and I completed the section from Cluny to Aulla over the Alps (very strenuous!!!) in October 2020 and had to stop because I couldn’t get my Visa renewed. We returned to finish it off in February 2020…and got back home in the nick of time before all hell broke loose with COVID.

This walk is very different to the camaraderie of the Camino Frances but the Via Francigena has probably even more history attached. The alsp and Italy leant a very different feel (and different food and wine of course!) which made for a great walk and enhanced our story about friendships, sacrifice and redemption.