Route 66: Why drive 2100 miles across USA and not even get to the other coast? 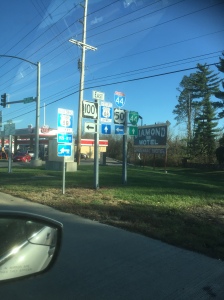 Why do a road trip? Given I started off this trip after researching the character for my next book who is into sustainable everything and ethical living, a walk (our usual form of filling in our spare time eg the 2038km version of the Camino de Santiago we did!) might have been a better choice.

But we were in America. And Americans drive. It was too cold (and risk of being snowbound) to go to another National Park (Yosemite in April was magic), and how else were we ever going to see the parts of America that well, frankly, there was no other reason to go to? Our media is full of US news and shows, we (Aussies) tear our hair out at what they get wrong (healthcare, gun laws), love what they get right (a lot of great films and TV, National Parks, positive attitude, just about everything about New York etc). We would have loved to do it in a Cadillac, preferably pink and with the top down, but again…too cold. On a motorbike? It’s my heroine Natalie that rides one not me!

But we had to get to New York, not Chicago. And Chicago was north (north = snow). So I drew a line from the most south-eastern point of the Route 66 (essentially Oklahoma City) and took in Memphis (a chance to see Graceland!), Nashville (fabulous- who does country music better than USA?) and Asheville (a gem in North Carolina we have been to before and didn’t need an excuse to return to). But we were enjoying Route 66 so much when we got to OKC…we kept going. Now in St Louis, it means a big day tomorrow, south on the Interstate.

Low points? Not many!

Anne Buist is the Chair of Women’s Mental Health at the University of Melbourne and has 30 clinical and research experience in perinatal psychiatry. She works with Protective Services and the legal system in cases of abuse, kidnapping, infanticide and murder. Medea’s Curse is her first mainstream psychological thriller. Professor Buist is married to novelist Graeme Simsion and has two children.
View all posts by annebuist →
This entry was posted in Blog and tagged route 66, travel. Bookmark the permalink.