The queue for Shaun Micallef

This is my third Sydney Writer’s Festival, but the first in my own right, where I felt I could stride into the Green Room rather than sneak in as a guest and feel guilty if I was sitting and there weren’t enough seats. All the Writer’s Festivals have their own ‘feel’ and it is probably no surprise that Sydney’s, held alongside Vivid, is full of buzz. This starts in the hotel where the author’s stay (though I also bumped into people from my ‘other’ life there- a Lundbeck rep and another Professor of Psychiatry in discussions with them!). From breakfast until late drinks around the bar there are huddled groups of intense young writer’s discussing politics, ambling newbies in search of a friendly face, and the bustle of agents, publishers, journalists and novelists all with drinks in hand.

Snippets like ‘…so you publish now…’ ‘…and I had a flaming row with (major USA film studio) and told them…’ and ‘I have some Chablis does anyone want some?’

(here with Terry Hayes – I Am Pilgrim, husband and Alex Adsett(literary agent)…in the bar, with the Chablis)

The bar staff for the most part look stressed. Are stressed—‘no there is no food, the chef said he’s too busy’…

The Green room is also busy. Tucked between piers and walled off from the coffee shop we want to spill into (but don’t need to for the coffee, the author’s Barista is just fine), milling volunteers launch into action with an increasingly loud and anxious ‘you really will have to hurry…there’s a sound check you know…’ Authors are not looking stressed or inclined to hurry—generally getting them to a panel is like herding cats. The volunteers deserve an award. 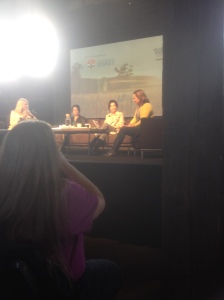 Then there is the buzz of the crowd—and there are plenty of people! Most of the events are sold out and I have to wangle a complimentary ticket to ‘A life of True Crime’ (above) –Julie Szego is happy to oblige and I feel I’ve known her forever though I met her for the first time last night (yes, in the bar), because she is the younger, feistier version of her psychiatrist sister Klara, whom I have known for years (and years…). I have already read her book The Tainted Trial of Farah Jama, a truly chilling tale of how the Law can really get things wrong (the man in question spent 16 months in gaol and was innocent), but was interested to hear how she and the other authors talked about the context of their books—how they justified telling other peoples stories. I had at one stage wanted to do Medea’s Curse as non-fiction, but felt it wasn’t my job as a psychiatrist to put back into the spotlight people who were trying to heal. Of course in many ways, Szego’s book is one to help healing, even though the family didn’t cooperate. In Asne Seierstad’s case—her book One of Us is about the mass murder in Norway by Andre Breivik—his story is over in that he is imprisoned, and she (I haven’t read it yet) also writes of the victims as an ongoing memorial but also as a cautionary tale. She still sees some of the families. In the third case, Virginia Peter’s Have You Seen Simone, it is an unsolved crime and she becomes part of the story, able to do things across Australia and Germany that professionals hadn’t been able to do. She is also being sued for defamation, which highlights one of the perils of such endeavours. The session was riveting—but I feel happy as a novelist bringing my knowledge to the thrillers rather than being tasked with real stories and the restrictions this places on you—as well as the responsibilities.

Yesterday my own session with partner Graeme Simsion was lots of fun—I think for the audience as well! Then a very different one, interviewed by Natasha Mitchell (Life Matters, ABC) along with Matt Haig (The Humans, Reasons to Live) and Michael Christie (If I Fall, If I Die) in a session called Neuroses and Diagnoses. Matt talked of his own depression which inspired a fable like quirky account of the meaning of life in The Humans, and then a small non-fiction Reasons to Live which tells little anecdotes and lists which he hopes would have helped his 24 year old self and may now help others, and Michael his own childhood which inspired his book about a young boy living with an agoraphobic mother—his response both in the book and life was to channel his rage at her hiding from life into Skate Boarding – he is a champion –but what made the book beautiful to me (and totally authentic) was how he had clearly reconciled his past and made peace with himself.

It’s great to see so much enthusiasm from audiences—and the numbers have to be better than previous years. The Glebe bookshop are working flat out, so hopefully this translates to more people buying—and reading—books.

Anne Buist is the Chair of Women’s Mental Health at the University of Melbourne and has 30 clinical and research experience in perinatal psychiatry. She works with Protective Services and the legal system in cases of abuse, kidnapping, infanticide and murder. Medea’s Curse is her first mainstream psychological thriller. Professor Buist is married to novelist Graeme Simsion and has two children.
View all posts by annebuist →
This entry was posted in Blog and tagged sydney writer's festival. Bookmark the permalink.