A Literary Taste of Dubai 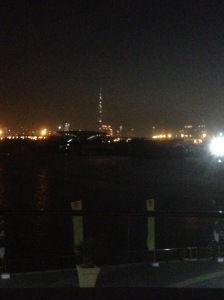 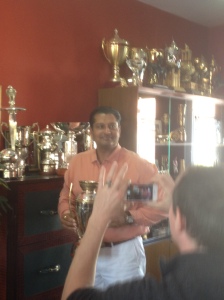 Back to being a handbag last week, as on the invitation to the Emirates Literary Festival I was the “guest”…amongst more square metres of Malls than I have ever been to in my life to this point—all likely to hold designer label bags should I want one (I don’t). If you count the Malls I ran through looking for exits, possibly more in one day than I have been to in a lifetime. It is true I am not a Mall fan, but that’s another story. We arrived early into Dubai from the Adelaide Writers Week, while it was still dark, into the Intercontinental at Festival City having missed opening night. Events started in earnest (at least the ones that attracted my attention or that require my husband Graeme) later in the week so I had a day to acclimatise. Well, try to.

Dubai is a city of contrasts, simmering in a curious energy, at times charming and others brash, and always with a sense of incongruity and hints of duplicity. The landscape is flat and uninteresting; even the port we were situated on, and the ocean stretching out to the horizon, seemed somehow flat and uninviting. Perhaps this is because development of the landscape itself demands attention. Tall elegant buildings shimmer in the haze, the Burj Khalifa, the world’s tallest building, arising from the dust and sand with its prominent spire. I took a train to the Mall of the Emirates (one of the ones I ran from train station to taxi) and along the way were pockets of traditional Arab dwellings, one and two storey with flat rooves, curved and latticed windows, but dwarfed by other areas of six to eight storey shells, the skyline littered with cranes as if in competition to build their section higher and faster, and buildings that have clearly been the architect’s dream brought to light by an indulgent prince or sultan. At the end of the trip of course was Atlantis, the Palm, another iconic building that I went to see at least as much to look at, as indulge in an insanely good water-park that made me desperately miss my children (and wonder what the hell I was doing there). The answer, if not for the “tick” on the itinerary, was a brilliant aquarium—a massive one, surrounded by the hotels, including premium rooms that look out onto it. I could have sat there for hours: the size of the fish and their schools was extraordinary, quite aside from the fake deep sea treasure relics that set the scene.

As promised, this is a modern city and while most people respect the dress code, there are no police locking women up for short skirts and most women do not cover their head. I saw more hijab here than I do in Melbourne though, with black head scarves, beautifully made up, elegant black gowns with gold and for some peeks of designer shoes. The men were polite and respectful (so were the women), considerably more so than the 86 Tram clientele in Melbourne. There are also women with only eyes or faces fully covered: largely Saudi’s I was told, with the suggestion that the Saudi men were the ones most likely to give leering looks at the westerners. I am not the right demographic to give comment from personal experience (and I had knees and shoulders covered).

There is constantly the sense of unease of East meets West and Moslem versus others: the train I went on where the men were herded into the half of the carriage not reserved for women by a man in military uniform where they remained like sardines for the rest of the journey; women parading around in bikinis at the water park despite the restrictions elsewhere; alcohol snuck in if you are at a hotel (or I gather a certified non-Moslem, in your own home) but instant gaol if alcohol is even on your breath while driving; affluence but instant revoking of your visa should you lose your job; low crime and feeling safe but stories of big brother warning you to do something about your maids illegal activities and risking gaol as her sponsor if you don’t.

We visited Sheik Mohammed’s (the guy who is Dubai) Zabeel Racing Stable: over 130 horses, most worth 10-20 million. Impeccable—everyone dressed in maroon (we got a maroon hat), spotless, and everything for the horses from massage to swimming and their own spa…Sateesh, the Indian man who has managed it for the full 24 years since its inception, was charming and informative. Only a few years ago they used to ride over to the beach—now you can’t see the beach for all the development! Desert stanza in the evening had us taking a bus and 4 wheel drive to falconry, camels, Bedouin food and poetry under the stars. For Stuart MacBride fans, he looks impressive with a peregrine falcon on his arm…And Joanna Trollope (who sat next to me and I had no idea who she was until I saw her photo the next day) has a very polished English accent and fighting the Duchess of Windsor for the title of who can be thinnest. She appeared to enjoy Bedouin food as much as the next person. I saw her on the front page of the paper advocating euthanasia—she seems to be going strong at this stage so fans needn’t panic.

Things here are still in limbo. The middle and upper class Moslems are fleeing here from countries where IS and radicalism is making life unbearable; but what will be the outcome is anyone’s guess. At least in U.A.E women can travel without their partner’s permission and can drive cars. I was left with the uneasy sense this couldn’t last as it is though, and have pictures of Dubai in ruins in fifty years. 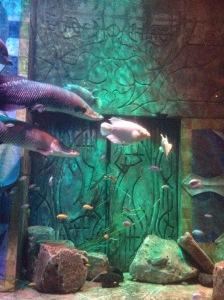 I then did partake of the literary festival itself—a clear labour of love for many ex-pats both resident and visiting, as well as the many local volunteers. Isabelle, the Grande Dame of the festival is a force to be reckoned with: majestic in her kaftans and the only festival organiser who I know who can decide on the last day to cancel the closing ceremony because everyone was too buggered—my words but her sentiments—and then at the last minute change the final dinner to the hotel from the golf club because of a sand storm. Without telling us; not sure how everyone else found out, but one of the volunteers eventually recognised my husband when we were wandering around looking for a bus.

The festival is set in the hotel in a whirl of organised chaos, men in white with traditional head gear, Moslem women mostly in black who repeatedly stood first and asked assertive and insightful questions, and unlike other festivals, swarms of children with sessions specifically for them. Rooms tended to have queues (and it was necessary to be careful you were standing in the right one, as they often merged), while authors ducked down service corridors to get to the stage on time. In this case, Marcus Zusek (The Book Thief), Graeme Simsion (The Rosie Project, The Rosie Effect) and Lauren Oliver (Delirium, Panic and other dystopian novels) talking book to screen. Three very articulate interesting authors—but I learned most from Marcus on this occasion. Trying to come to terms with negative reviews from readers I am a little raw—the first rule of don’t read them was broken when it pooped into my inbox as I follow the review site, and inadvertently on Twitter because the initial was positive and I was about to follow it up…—but Marcus mentioned moments of doubt and self-loathing (still), and his book I noted also had some negative reviews, despite many loving it and him being hugely successful. Note: I need to be kinder to self…he even more so!

Peter Robinson (DCI Banks…22 of them!) did a getting started session which with only about 20 was nicely intimate, and though I was probably a bit ahead of the content, I am being asked to give such talks and it’s nice that even though less successful/experienced, I’d be saying all the same things. He also re-iterated to me not to read Amazon reviews!

More crime with Stuart MacBride, Sophie Hannah and Yrsa Sigurdadóttir, all with marvelous senses of humour—and it was nice to hear the first author I’d heard who writes like I do: Sophie plans the structure and then writes rather than letting her characters take her completely up garden paths…

Mix into this a murder night with the local theatre company, a farewell and …well I couldn’t live here, but the festival was full of diversity and humour. What’s not to like? 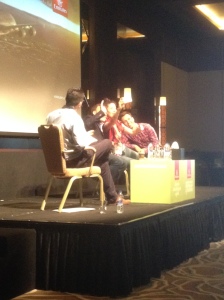 Anne Buist is the Chair of Women’s Mental Health at the University of Melbourne and has 30 clinical and research experience in perinatal psychiatry. She works with Protective Services and the legal system in cases of abuse, kidnapping, infanticide and murder. Medea’s Curse is her first mainstream psychological thriller. Professor Buist is married to novelist Graeme Simsion and has two children.
View all posts by annebuist →
This entry was posted in Uncategorized and tagged dubai, emitrates literary festival, graeme simsion, marcus zusak, peter robinson, sophie hannah, stuart macbride. Bookmark the permalink.

1 Response to A Literary Taste of Dubai