Two years ago I attended the writers’ festival here in Perth, accompanying my husband. As an avid reader I wasn’t sure why I hadn’t ever been to more—the occasional session that took my fancy in my home town festival had up until this time been the only time I had ever previously attended what I now know to be merely the tip of the iceberg of literary possibilities. In Perth two years ago, I hurried from tent to lecture theatre and from action workshop (LA Larkins) to luminary (Jarrod Diamond springs to mind). I was hooked.

This year I was privileged to have been invited as a speaker, so I am back again, this time with a legitimate pass (an artist lanyard!) into the Green Room. Again, the town in the west has greeted us with day after day of sunshine, brilliant welcomes and a bar at the end of the day full of relieved authors and garrulous publicists.

It is a wonderful way to meet new and interesting people. A little less than two years ago I was in Freemantle at the Romance Writers of Australia conference feeling like a fish out of water. I had just given a paper at the Elizabeth Jolley literary conference (a whole story in itself—I mistakenly applied and was accepted and then had to do a full academic review to present what I had originally intended as a light tongue in cheek about werewolves versus weredevils) and was saved by a Jaye Ford workshop (and two weeks ago we were together at a Sisters in Crime dinner promoting our books) and meeting a dynamo called Georgina Penney. Low and behold, at the welcome reception at this festival, she recognises me. She’s here as a Perth born writer, now living in Aberdeen, Scotland, promoting Fly In Fly Out, a romance (with her wonderful quirky humour). She beautifully described why romance—as a survivor of a very difficult background what better way to escape than into romance, and what better way to show others from abuse backgrounds the alternative more positive sexual relationship options.

One of the many benefits of festivals such as this is the diversity. The conference was opened by a rambling Bob Brown that one can somehow forgive anything (including the Vaudeville style piano playing he had been probably waiting all his life to do in front of an audience), we have Penney’s romance as well as Elizabeth Gilbert’s creativity talk. I listened to her discuss her more recent ‘serious’ book—she didn’t want to waste the opportunity success had offered her and suggested we all aimed high in an intelligent and thoughtful interaction suggesting maturity gained from Rome and Indonesian jaunts. Today I am heading off to Geraldine Doogue and Mary Delahunty talking about Women in Power.

Other highlights? Husband Graeme Simsion has had audiences giggling—helped by Liane Moriaty in one session, Emma Healey (Elizabeth is Missing) and me in another as we chatted to Gillian O’Shaughnessy. I got to be up front with Barry Maitland, a writer whose books set in UK I had read, and his latest in Sydney, Crucifixion Creek, before I knew I was to get this gig. This afternoon I’m up with Dawn Barker, a Perth psychiatrist who also writes fiction. When I first met her at the Sydney festival two years ago (I was in handbag mode) I had heard about her book on postpartum psychosis, Fractured, and mine was yet to be submitted—I badly wanted to hate her for taking my idea (as it happens Medea’s Curse is a very different book)—but couldn’t because she’s far too nice!

My favourite session was the one with Erik Jensen (Acute Misfortune), Miranda Richmond Mouillet (Fifty Years of Silence) and Tom Rob Smith (The Farm and Child 44 trilogy). All three are very bright, articulate and fascinating. Erik, a journalist, was shot and thrown off a motorbike by the subject of his biography, Adam Cullen—his frank attitude to the truth at all costs true to his journalistic creed made me particularly grateful I didn’t continue writing Medea’s Curse as nonfiction because I am just not that ruthless. I loved his comment about ‘carapace of tenacious naivety’—he was 19 when he started the book. Tom Rob Smith’s trilogy had kept me reading well into many a night; The Farm started as real life too. Miranda, a North Carolina woman raised partly and now living in France, is extraordinary—I had to buy her book and read it, finishing it at 11am yesterday. I will review it at some stage, but it is a beautifully written nonfiction account of her discovering her roots through tracing her grandparents through the war in Europe and finding why they split up and didn’t speak for fifty years. Yes they are Jewish, but this isn’t a story of concentration camps, but rather being hidden, refugee camps post war and a realization about much that happened after the war rather than during it. It’s beautifully written, heart-warming and has a touch of magic.

Actually, magic? Yes there is a bit of that in the air here in Perth.

And after this? Next week Adelaide Writers’ festival for the first time ever.

For twenty five years I have had (and still do) a wonderful community of perinatal health professionals I meet yearly at the Marce conference–this year I have been invited to Adelaide Marce to give the the Marce medal lecture, an incredible privilege.

Now I am, though much older than when I started as a junior psychiatrist at the Marce, starting out as a junior in this wonderful world of writers. I feel humble, and very, very grateful. I want to soak every second in, reading all these writer’s wonderful books, trying all the time to write better myself.

Adelaide? Bring it on. Both my old profession and my new. 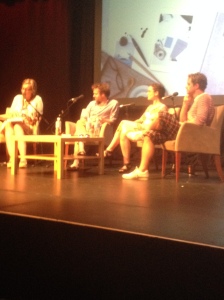 Anne Buist is the Chair of Women’s Mental Health at the University of Melbourne and has 30 clinical and research experience in perinatal psychiatry. She works with Protective Services and the legal system in cases of abuse, kidnapping, infanticide and murder. Medea’s Curse is her first mainstream psychological thriller. Professor Buist is married to novelist Graeme Simsion and has two children.
View all posts by annebuist →
This entry was posted in Uncategorized and tagged #perthfest, #pwf15, Miranda Richmond Mouillet, Perth, Tom Rob Smith. Bookmark the permalink.