I went to a book launch last night, held at The Avenue Bookshop in Albert Park. The book to be launched was Australian Love Stories edited by Cate Kennedy, a collection of 29 short stories selected from 445 entrants. I’ve been to now a number of book launches since my introduction to the Australian literary scene, dramatically via my husband’s book, but much more gently and gradually through my own forays into writing mainstream fiction (my prior fiction in any event had an American publisher and was more targeted to their audience). It was nice to recognize so many faces! 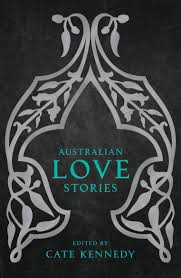 What this one had in common with the others, was a group of people dedicated to reading, and celebrating books and stories, and the bookshops and publishers that continue to battle the e-book take over (Never! Come the claims, partly in desperate hope, but also in recognition that there are a number of us, who even if we do have Kindles, like the feel of paper in our hands and the written word on the page).

Because there was also a fair few of the 29 contributors present, plus Rodney Hall metaphorically smashing the champagne against the ship hull, Donna Ward offering tributes to the editor and authors (she has become a palimpsest of Australian love: I just love that word!) and Cate Kennedy talking about reading 445 love stories in the middle of a cyclone in Asia, there was even more than usual good will and bonhomie about writing, reading and books. Easy to forget amongst some company the generation of younger people addicted to reality TV…

There was also talk of love. Inevitably, some politically correct statements about winning wars with love not hate; a titillating reading where it was left to “dot, dot, dot…” (this wouldn’t have happened at a launch from my American publisher I suspect), and more tantalizing the introduction of an idea that is explored in the collection (apparently, as I haven’t read it) of love not just between couples of which ever gender, not even just between parent and child, but a broader reaching to love and “its attendants”. Probably not the more malicious attendants (leave that to psych thrillers) but one section is deliciously named “Adrift in Shards and Shattered Fruit”. Enjoy reading—I intend to.

Anne Buist is the Chair of Women’s Mental Health at the University of Melbourne and has 30 clinical and research experience in perinatal psychiatry. She works with Protective Services and the legal system in cases of abuse, kidnapping, infanticide and murder. Medea’s Curse is her first mainstream psychological thriller. Professor Buist is married to novelist Graeme Simsion and has two children.
View all posts by annebuist →
This entry was posted in Blog and tagged love stories, writing, writing fiction. Bookmark the permalink.